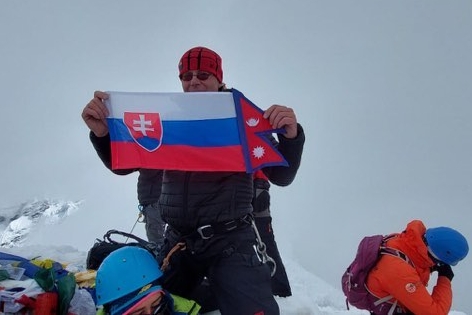 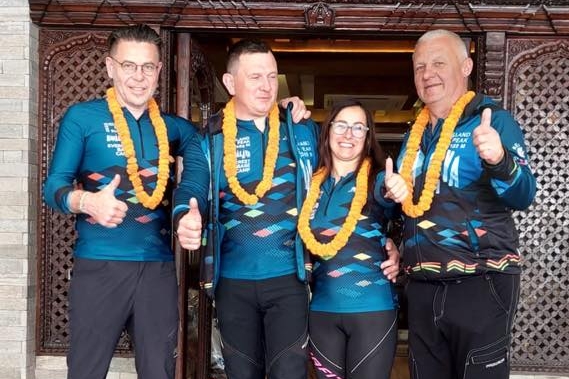 As many as 300 groups of trekkers and adventure seekers try to scale it every year. Island-Peak-in-Nepal is  a landmark to ascend   the Himalayan summit along with  the breathtaking experience of venturing the Everest Base Camp and  Kala Patthar.

The most challenging part of climbing is when the trekkers have to cross a mixed rock, ice wall which lies on the slope leading next to the thin summit edge. The best time for embarking for a climbing trek falls roughly in the months of March- May and September- December.

Nepal Island Peak Climbing begins with a mountain flight to Tenzing Hillary Airport at Lukla from the Capital City of Kathmandu. After an exciting 35 minutes flight enamored with the beautiful scenaries of the  mountains nearby , we will reach the Lukla Airport . It is from here that the peak climbing venture begins.

Reaching the summit is a challenging task. Nevertheless, once the trekkers reach the top, they will get to witness all the mesmerizing textures of the splendid the mountains out there. During the course of the trekking and climbing, you will also walk along the trail that passes nearby from the Dudh Koshi River.

Besides the adventures of trekking along the popular trail in the country, the trekkers will also be enamored with perfect views of the villages of Sherpa and the artistic monasteries. The most exciting thing about it is that they will learn more about the way of life of the people and the villagers.

Once you are done with climbing, you will then return following the route back through Namche to Lukla. You will get to harbor all pleasant memories of climbing.  Afterwards, you will take a flight back to Kathmandu from Lukla.

Upon your arrival at the International Airport in Kathmandu, our team members will welcome you and explain briefly about the travel itinerary. Then they will take you  to the hotel where you will be staying  overnight.

On the second morning, you will board a flight to the Lukla Airport,  commonly known as Tenzing Hillary Airport. It is a wonderful mountain flight , a marvelous  adventure given that the airport is enlisted as the most dangerous airport in the world  considering the  the location, altitude and topography. In less than 30 minutes, you will reach Lukla while enjoying the breathtaking views of the mountains during the flight. After landing at Lukla, you will take light breakfast and embark on the trek. In around 3 hours, you will reach Phakding village where you will be staying overnight at a guesthouse.

In the third morning, we will resume our trek and follow the trail along the Dudh Kosi. Then we will ascend through Himalayan Pine and Deodar Cedar forests to our ultimate destination towards a popular village of Namche Bazaar. The village of Namche has remained a historic trading point for Nepalese and Tibetan traders who exchanged salt, dried meat and other consumable and textile items. Overnight stay at a guesthouse in Namche.

You will spend this day at  Namche  for acclimatization. As the altitude will increase significantly, a day for acclimatization is paramount and strictly advisable for prospective trekkers. One can spend the day in Lukla visiting the local Bazaar of Namche or visiting the nearby Sherpa villages. If you are not much tired and are ready for a few hours of trek, then you can go to Everest Hotel to enoy the panoramic views of Mount Everest, Mount Lhotse and others. Located at an altitude of 3900m, Everest Hotel is the hotel that is situated at the highest altitude in the world. Overnight stay at a guesthouse.

Tengboche (3,867m) is another village of Khumbu region which lies in North Eastern Nepal. Tengboche is famous for the presence of a Buddhist monastery thought to be built in 1923.Tengboche offers panoramic sight of Himalayas, Mountains and different popular Peaks. Tengboche is also the birth place of mountaineer Tenzing Norgay Sherpa. Overnight stay at a guesthouse.

Soon as we are done with the breakfast in the morning, we resume our trek heading Pheriche. Pheriche is another village of Eastern Nepal of Khumbu Region which stands at an altitude of 4,371m. It is famous for trekkers as well as climbers because is a stop point  for them to get  some rest. Initially, this place was known for farming potatoes, buckwheat and rearing Yaks .These days, especially men of this region  are mostly engaged as  trekker guide or bearers. Overnight stay at guesthouse.

On this  day , we will head towards Lobuche after having breakfast in Pheriche. Lobuche is a beautiful place  full of  mountains. Basically it connects with  with two major Peaks ,namely Lobuche Far East and Lobuche East. Overnight stay at a guesthouse.

Gorakhshep is an ending trail for numerous trekkers in the Khumbu Region which decoded as ;Dead raven; in Sherpa idiom. Apart from the habitat it is known as a residential territory for large flocks of soaring ravens. It is interesting to know that Gorakhshep is the last  village you will encounter before reaching the  Mount Everest. You can stop here for the lemon tea too. Overnight stay at a guesthouse.

In this day, we will move to Chhukhing given that  it  famous in the Khumbu region . All the trekkers and climbers rest at this spot before aiming for the peak, Chhukhung. We need to walk a little bit more than usual  as it a long day trek. Chukkang is just a little bit far from the Island Peak Base Camp. Overnight staying guest house

Next day, we will hike further up to High Camp from the Island Peak Base Camp. You will havae to walking for 4 hours. Also make sure you are ready for the High Camp and pumped to prepare for the next day so that you can get to the summit. Overnight stay at tented camp.

We will have an additional day   today to venture the  summit. This is like a bonus day for the exploration. There are enough things to explore in the Summit and you will enjoy the lush  beauty for sure. Overnight stay at a tented camp.

Today, soon as we are done with the breakfast, we will resume our downhill trek from the Island Peak. Trek to Tengboche will take around 4 hours. Overnight stay at a guest house.

The next day, we resume our downhill trek from Tengboche to Namche Bazaar (3440m). Namche is a wonderful  place to enjoy the scenic beauty of nature. On your way, you can stop to visit the typical villages of Khumjung along with Khunde. You can even visit the monasteries which are very unique in its structure. And keep walk down to Phakding. Overnight stay at a guest hour.

The trek continues further downhill as we reach Lukla after almost seven hours . You will stay in Lukla for the rest of the day and prepare yourself to board a flight back to Kathmandu the same day. On the penultimate day of the tour package, you will board a flight back to Kathmandu while enjoining the 45-minutes of exhilarating mountain flight. You might as well  spend rest of your time shopping or buying souvenirs at Kathmandu .Overnight stay at a hotel in Kathmandu.

On the 17th day of the tour package, you will return to your country via the international Airport in Kathmandu.