Langtang region in Nepal to the ranges from the north of Kathmandu and bordering Tibet. It is  a protected region , namely Langtang National Park . The region imbibes numerous  peaks including Langtang Lirung (7246m). As of 2012, the entrance ticket to the park is 3000 Nepali Rupees which you must buy at the park entrance.TIMS are also available  :Passport photos should be brought  for foreigners.

About 4,500 people live inside the park, and many more rely on it for timber and firewood. The majority of the residents are Tamangs.

The park contains a range of climatic zones, from subtropical to alpine. Approximately 25% of the park is forested. Trees include the deciduous Oak and Maple, and evergreens like Pine, including various types of Rhododendron. There are animals like Himalayan black bear, the goat-like Himalayan tahr, Rhesus monkeys and Red Pandas. The region is also forged with the stories of Yeti sightings.

Soon as you land  Kathmandu, one of our representative will receive you . You will then drive to your hotel in  our vehicle. Afterwards you can rest in the hotel and prepare for the next day to come.

This day , we will take a ride to the village of SyabruBesi soon after break fast.We will stop through some of the historically and commercially significant settlements where you can take brief breaks. The breathtaking  scenery of the vegetation and landscape seeps  through your window as you head deeper into the rural face of Nepal. The road is adventurous, and you will travel mostly through graveled sections in the hills. After reaching SyabruBesi rest for the day. Overnight at a lodge in SyabruBesi.

*Note: You also have an option to hire a private Jeep/bus to Syabru best from your hotel in Kathmandu.

We will embark to  our trek to Langtang-Gosaikunda from SyabruBesi early today. We will set off from SyabruBesi  after we have crossed the mighty Trishuli river. Initially,the trek is plain throughout the lush forest through out the hills that leads to Pahiro and Bamboo.Then, we will gradually descend  to the Lama Hotel. The forest clears as you will near the Lama Hotel. You can be a sole witness of the lifestyle in the small settlements on your way here. You will also get yo witness the beauty of Langtang National Park in this stretch of the trek. Overnight at Lama Hotel.

We will do a quick warm-up walk .Then, we will watch the  the sunrise from the  hill today before embarking into the trek. There cannot be a better way to start a day . We will  make our way through the blooming rhododendron forest to Gunachock. The view clears today, and you can have a mesmerizing view of Langtang Lirung, Naya Kang and many other sub-ranges. You will pass the settlements of Thomna, Ghortabela, and Thyangsyap following the trail.You will get to explore all the  showcases  of Tamang culture at this place . You can also stop for brief shopping here. In the late afternoon, Langtang valley comes to  full sight. Its from a certain  distance that you will get to glace the picturesque village. Overnight at a lodge in Langtang village.

Today’s trek will be relatively shorter than the other days. You will have enough time today to enjoy the surrounding beautiful view during the trek. In the morning, you can enjoy the short village tour. The village of Kyanjing is one  among   many culturally  significant settlements of the Langtang region. Foe rest of the day , you might as well  take some rest. Afterwards we will get ready to take a brief tour towards the village. In the evening, you can pay a visit to the local cheese factory and try some of the delicacies. Overnight at Kyanjing village.

Acclimatization is a crucial key when itr comes to  hiking in the Himalayas. At the  altitude of 3820 meters, Kyanjing will be an ideal stop. However, you can ease the pressure of altitude sickness with the short hiking options to the nearby  destinations that are equally appealing. Your first stop today will be Kyanjing gompa if you have not visited it yet. The beautiful paintings in this place  carry age long stories.The Gompa itself holds great significance to the locals. Other popular options are also there giving you the perfect view of Langtang Lirung (7234 m), Yala peak, DorjeLakpa (6966 m) and Kangchenpo mountains from a close range. These three are some of the best promising short hiking sites near Kyanjing village.

After returning from the hike, you can rest for the day. Overnight at a lodge in Kyanjing village.

We will start our trek early and set off from the Kyanjin village. You will see the village lilting with snow covered mountain  beautiful than ever. Foe most of our trek today we will descend. Also , we will walk through some of the earlier settlements to reach the Lama Hotel. You can encounter Himalayan sheep (Naurs) and beautiful Himalayan birds in the trail today. The walk will get more relaxed as you near the Lama Hotel. You will reach there in late afternoon and rest for the day.

The trail of today is relatively similar to the halfway mark as the earlier hiking days to Pahiro. We will then choose the next route to the ThuloSyabru village today. Passing by the Bamboo village, we can see the SyabruBensi from the trail separating at Pahiro. For the last couple of hours, we will gradually walk  uphill to ThuloSyabru village. ThuloSyabru is a beautiful and comparatively more important Tamang settlement of the Langtang region. Stroll around the village for a while for  and try some local cuisine in the evening . Overnight at a hotel in ThuloSyabru.

We will begin our day with some breakfast .The majestic landscape surrounding the ThuloSyabru village will be a perfect treat. We will start trekking and commence an uphill trek towards the ridge at Phoprang danda (3190 m). This Danda (hill) is popular among the visitors and locals for the fantastic fresh breeze accompanied by the majestic panoramic Mountain views. We will walk through patches of rhododendron forests amongst the sub-tropical region to  Sing Gompa or Chandan Bari. Pausing for a little while , we will walk further to the village of Lauribina. On the way to Lauribina, we will pass through a  sanctuary  specifically known for habouring  rare Red Panda. The majestic views of Manaslu, Annapurna, and Ganesh Himal appears more beautiful with every walk. This is how  we will know Lauribira is close. Overnight at a hotel in Lauribina.

The best views of the Himalayas can be witnessed  from the ridge  nearby at Lauribina as we begin our day earlier today. Our trek to the holy lake of Gosaikunda today is relatively short. The trail is one of the beautiful prospect of the trek.We pass through pastures and streams before reaching Gosaikunda. Lake Gosaikunda is the landmark of our trek. However, there are more than dozens of small and big lakes surrounding the area. You can  reach all these beautiful lakes  within some hours of hiking from the  central Lake. SaraswatiKunda (Lake), Bhairav Kund, DudhKund, RagatKund, Chandra Kund, and AmaKund are some of the major lakes we will stroll around as for  today. Gosaikunda is a beautiful lake with many  hindu devotees visiting  throughout the year. According to  hindu mythology  the god of destruction Lord Shiva made this lake to quench his thirst with his mighty Trishul to extract the Gosaikunda. Hence, the river formed out of this lake  is well known as Trishuli which we seemed to have  crossed down back in SyabruBesi. People  believe that their prayers will be answered by Lord Shiva if they walk all their way  to Gosaikunda with a pure heart and worship the shrine. The view of the Snow-capped the Himalayas below the sea of clouds from Gosaikunda is pristine as well. Overnight at a hotel in Gosaikunda.

After watching the beautiful sunrise from Gosaikunda, we will start our trek for the day to the village of Gopte. We will venture  the Lauribina La pass first which is also the highest point of our trek. Crossing three small lakes on the way, we will start our uphill rocky climb to Lauribina Pass. Once in the top, you can have an incredible 360-degree view of rocky hills and snow-capped mountains touching the horizon. After spending some time in the Pass, we will start our descent to the village ,Gopte. Rest for the day in a lodge once you are in Gopte.

*Helambu region begins once on the other side of Lauribina La pass.

Our trek for today is to the village of Kutumsang . It is mostly downhill and through a lush sub-tropical forest. The trek is refreshing and walking down in the ridge we can have a spectacular view of DorjeLakpa and Shisha Psangma (8027 m) mountains. Crossing Magin Goth in the way we will walk further to the Kutumsang village today. Overnight at a lodge in Kutumsang village.

Chisapani  trek  is one among the  most preferred day hike selection from Kathmandu. This trekking route includes this amazing destination as it promises many scenic, natural, and cultural delights. One can say that these trails illuminates the beauty of the Helambu region as a whole. We will walk up and down the green hills to reach the natural viewpoint of Chisapani. We can have a fantastic view of the far and wide hills and mountains from here. This Picturesque setting is perfect for surrendering yourself to the enigmas of nature. Overnight at a hotel in Chisapani.

Our last day of the trek starts with an amazing sunrise view from your hotel in Chisopani. We will walk to Sundarijal and drive back to Kathmandu today. You will pass through multiple settlements where you can take brief stops to try some of the local snacks. After reaching Sundarijal, you will take a private cab back to your hotel in Kathmandu. In the evening, you can enjoy the nightlife . You can also spend a quality time in  souvenir shopping near your hotel. Overnight at Kathmandu.

We will set you off  to the TIA couple of hours before the departure flight. In your spare time before the flight, you can revisit some nearby restaurants and monuments. You will fly over Nepal back to your home with  some amazing experiences, captivating  stories, and lifelong memories of the Langtang Gosaikunda Helambu trek. 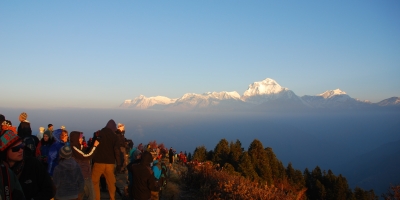 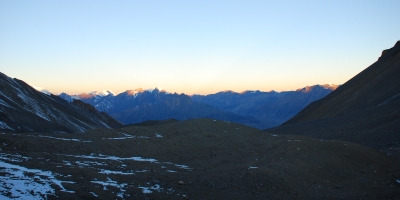