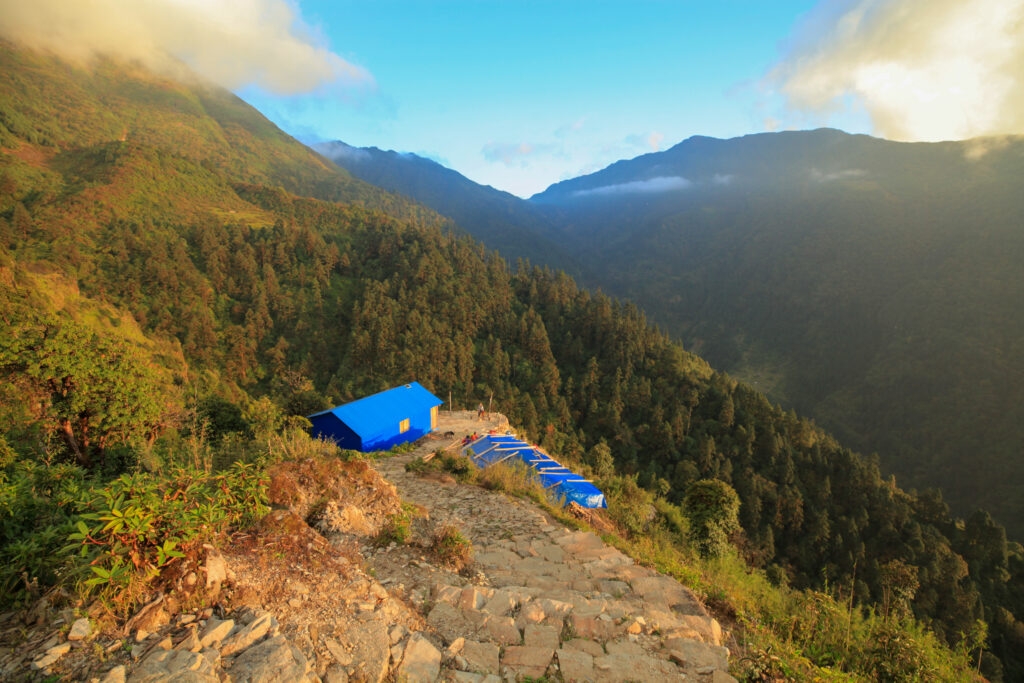 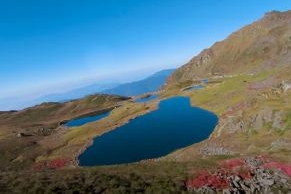 You are cordially invited to get ready for a  14days trek to  Panchpokhari. Get enmeshed into the ecstasy of venturing throughout  the mesmerizing journey into five lakes located at the foothill of Jugal Mountain. Leaving Kathmandu, we will head northeast and drive for about 5hours to reach Chautara which is the Headquarter of Sindhupalchowk district. Chautara is the starting point for trekking in Panchpokhari.

The trail proceeds through river, forest of juniper, pine, rhododendron, bamboo and other alpine flowers where we can get the opportunity of enjoying the views of Himalayan Wildlife. We will climb to the forested ridge and observe the scenic mountain views of Jugal Himal Range, Gaurishankar and Dorje Lakpa. Walking along the trail decorated with prayer flags and chortens, we will pass through the white coloured houses of Tamang and Sherpa ethnics at Nasimpati. Then, we will reach Panchpokhari after climbing Laurebinayak Pass.

Panchpokhari lake carries a profound religious significance. You can enjoy the panoramic views of Jugal Himal Range, Gosaikunda and Rolwaling Himal Range from Panchpokhari. Return trail will be through Nasimpati and Dukhang to Melamchipul .It is from here that  we will drive back to Kathmandu.Trek Panchpokhari is the least crowded trekking route and it can be taken throughout the year.

As you land in the TIA airport in Kathmandu, a  representative from Trekking will receive you. Soon as you are done with  your custom formalities ,our representative will take you to the luxurious hotel. There you will get a brief explanation about the 14days Panchpokhari Trek and then enjoy the welcome dinner in the evening.

We will leave our hotel early in the morning and head towards the northeast of Kathmandu. We will travel  328km  in about 5hrs until we each Chautara, the Headquarter of Sindhupalchowk district.Chautara has all these facilities  of bank and lodges . We will find the appropriate hotel in Chautara and stay overnight.

Phusre is the scenic yet small village located at 2045m altitude. We will cross the river and take the steep climb to reach Phusre which is the small village of Tamang ethnics. Although the route  will be tiresome, it will reward us with views of Gaurishankar, Dorjelakpa and other mountains and peaks

As you go past Phusre village, we will take a steep climb through the forested ridge. Walking along the forest of pine and blooming rhododendrons, we will reach the top of ridge .There we catch glances of Jugal Himal Range, Gaurishankar and Dorje Lakpa. Ascending further, we will reach meadow at Kamikharka where we will stay overnight.

On this day, we will cross a rather plain land.  Here we can catch sight of dispersed and temporary settlement of nomads. We will follow the trail through forest to Pauwabas where we will stay overnight. Devotees on their trek to Panchpokhari stop in  the rest house at Pauwabas.

The trail runs further through the forest of bamboo, rhododendron, pine and oak towards  the top of ridge where Hilebhanjyang is located. At the top of Hilebhanjyang , you will get to encounter the village where mixed ethnic groups live together. We will enjoy the sight of cascading waterfall and river valley from Hilebhanjyang.

After an early breakfast, we will walk past a  trail that moves  through the  forest. Later, we will arrive at the vast open expanse of land that offers striking views of Jugal Himal Range and Gaurishankar Himal. We will stay overnight at Nasimpati.

We will reach our destination ;Panchpokhari on this day. Panchpokhari is a very  religiously significant trek. The region holds altogether five different lakes lying adjacent to each other and thus it was named Panchpokhari ,which means Five Lakes. We will pass through Laurebina Pass to PanchPokhari. Jugal Himal Range, Gosaikunda and Rolwaling Himal Range can be seen from Panchpokhari. Great fare is organized in Janai Purnima which roughly is in  the month of August.

Our return trek begins on 9th day. We will cross Laurebinayak Pass and retrace our route through forest to Nasimpati.

The trail runs through forest of pine, juniper, bamboo and other alpine flowers for about six hours just before  reaching  Dukhang. We will walk through the trail decorated with prayer flags and chortens to reach Dukhang which is populated by  ethnic Tamangs and Sherpas.

After a  short descent, we will reach Indrawati River. Walking along Indrawati River, we will proceed through the crop fields towards Dhap, a  Tamang Village. We will stay overnight at Dhap.

Past the Indrawati River, we will move in and out of scenic villages and cross the terraced fields. We will view Hydropower Project in Melamchi and proceed through tea houses to Melamchipul Bazaar. Here  we will stay overnight

We will take a 4 hour ride  to Kathmandu .Here we will stay at a hotel.

You will have your assistance  in your last moment preparation. Afterwards, our representative will take you to International Airport . It’s from  this place that  you will move to your next destination.